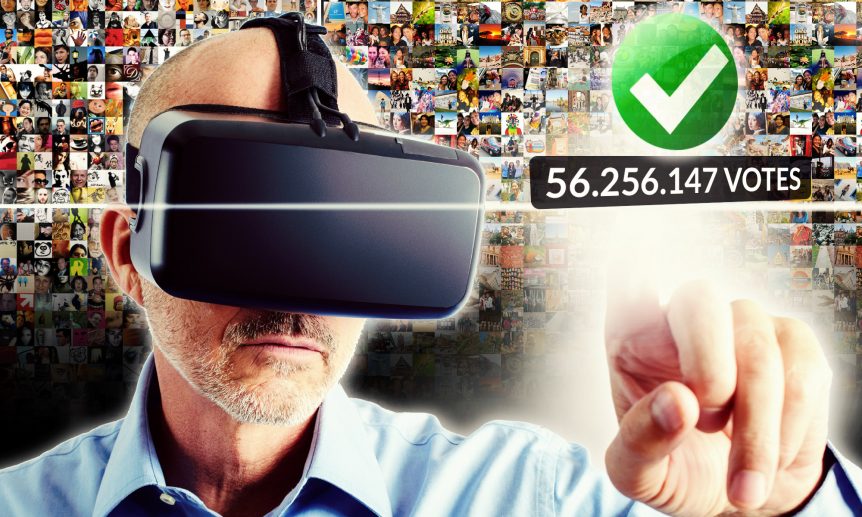 This article is the continuation of “What if Plato had created a startup? “. It examines seven simple proposals that would revolutionize our current political model through the marriage of collective intelligence and digital technology.

1. Vote for projects rather than for candidates

The current political system forces voters to choose a candidate and the program he / she represents, even if they disagree with the candidate’s behavior or several points in his program. This system encourages the cult of the personality and the model of parties, which often oppose each other in a sterile manner. As for the program, it is most often forgotten a few months after the election.

Rather than voting for an individual, we could switch to a system where citizens vote for a project. They choose, via a questionnaire, the main orientations they want to give to society in the field of labor, education, health, etc.

They then select the candidates according to their ability to carry this project of society chosen in common. Candidates become “project managers” more easily replaceable than in the current system while the common project of society becomes the true heart of citizenship.

2. Turn a part of taxes into local participatory budgeting

The current system where public money is totally controlled by the state disempowers citizens as they do not see the connection between their contribution and the social impact it generates. Those responsible for deciding on the use of public funds are often disconnected from realities and the culture of the Commons is now more depleted than ever.

By making 10% of the amount of taxes available to citizens in the form of participatory budgets, it would be possible to restore the sense of the common good to the collective. Citizens would be called upon to propose projects at local or national level and to finance the projects they want to achieve as a priority. Citizens who have carried out the ideas of projets could realize them in order to generate employment.

The laws have become more complex than ever. This complexity serves only the richest individuals and organizations who can manipulate it to their advantage by ensuring the services of specialists capable of understanding it. As Tacitus said, “Coruptissima civitate plurimae leges”: the most corrupt city is the one with the most laws.

However, the legislature must by definition be understandable by anyone, since the laws must apply to everyone in the same way.

A possible solution is to re-establish a direct circuit between citizens and legislative bodies. The movement https://www.mavoix.info/ gives an excellent example of this: citizens are informed of a bill, debated and voted on via an online platform. Secondly, members chosen at random from among the citizens undertake to vote exactly according to the collective. For example, if 50% of citizens vote for a law, 40% against and 10% abstain and there are 10 deputies representing the movement in the Assembly, 5 MPs will vote for, 4 against and 1 ‘ abstain.

This type of approach can make it possible to involve the citizens in decisions beyond the mandate originally given to the representatives.

The measures proposed above only become meaningful if the citizens propose original solutions to the problems encountered by society. Today, the analysis of problems is entrusted to some specialists: it is time to entrust it to the collective intelligence.

One possible solution is to link the digital discussion platforms with citizen chambers at the territorial level. These chambers bring together several hundred citizens and thus reflect the diversity of points of view present in society. They meet monthly around a theme to bring innovative solutions to the field of economics, employment, education, health, energy, etc.

They make it possible to construct concrete action plans and progressively reduce the unnecessary complexity of laws to bring them back to a common sense.

5. Creating places for the development of Commons

In contrast to the public park that illustrates representative democracy, where citizens no longer feel responsible for the common good, direct democracy is exemplified by the shared garden.
We lack places of meeting where citizens can exchange, create experiment, and thus grow new ideas and a new society.

It seems to me more essential than ever to open up local places dedicated to peer-to-peer exchange. Everyone could come to share an experience, propose an idea to create a business, discover a trade, learn a practice, do co-development and create common goods ranging from the creation of a shared garden to the creation of open source software .

6. Track the creation of social value

The current economic system encourages individualism and selfishness more than cooperation and mutual aid.
The people who are involved in social life could see their commitment materialized by a “contributory indicator” which will be restored in an online profile. This indicator will work as a collaborative currency. This currency will be generated by positive actions for society, and could be spent in the form of additional rights (indemnities, training, etc.) or resources.

The present territorial division is made according to a purely administrative logic and superimposes too many layers. It does not reflect the identity of the territories. As for the supranational consciousness, it is not sufficiently developed and yet too few humans really feel as “citizens of the World”.

It is therefore a question of embodying the principle of subsidiarity by giving power to the smallest elements of the system capable of deciding, but also extending citizens’ awareness beyond national borders.
As long as the collective is unable to weigh on a global level, there will continue to be states and corporations that will violate human rights, pollute and seize resources by betting on the apathy of the majority.

The logical outcome of the vision I present here is the establishment of a direct democracy at the global level. Today, there are nearly 200 countries in the world, and in practice this would mean considering that the Internet could eventually become the 200th, functioning as a dematerialized state in which all Internet users would be citizens working together to solve problems before of which the classical states are paralyzed.

The reality of tomorrow begins with today’s dream

The set of measures I describe here may seem utopian. In reality, they are easily attainable, at least on a technical level. On the other hand, they call for a complete rethinking of the mental maps we use to envisage citizen life, in particular the identification between democracy and representation, which are in fact two distinct concepts and which, I believe, will now become more and more contradictory with the rising of a direct democracy.

It is illusory to think that the system can reform itself from within, and like all other areas that have been transformed by the Internet, change will be brought about by civictechs such as DemocracyOS, Engage, Loomio, Voxe, Brigade, etc., which are in the process of reinventing politics by making it possible to compare programs and measure their achievement rates, to make permanent referenda, initiating citizen actions, managing local political life, etc.

However, that will not be enough. I am sometimes asked why, as a specialist in HR innovation, I am as interested in the issue of politics. That’s because I think it’s the same question. In my opinion, the only goal of HR innovations is to unleash the potential of the collective, which alone can find the solutions to problems that go beyond us individually.

We are in a situation where economic inequalities, social injustices, ecological distress have become worse than ever. This crisis exacerbates tensions across the globe, setting up conflicts for control of resources that are likely to bring all of humanity into a waking nightmare.

And even if civitechs manage to create new channels of governance, it will be necessary to find the levers of commitment to build and develop communities in order to turn them into active and learning ecosystems, which is a matter of human capital. This is why the solutions developed by the HR innovation startups include more and more dimensions of consultation and collaborative action. There are people of goodwill everywhere: the only thing they lack today are tools to transform this positive action potential into a reality.